Villar-en-Val, nature and poetry in Corbières

Located near Lagrasse at the end of the Val de Dagne, the small Audois village of Villar-en-Val has preserved the remnants of its rich past, as evidenced by its old Lord's castle and the Romanesque Church of Saint-Paul with its beautiful Lombard arches.
The birthplace of writer Joseph Delteil (1894-1978) invites you to wander along its Sentier-en-Poésie (Poetry Trail). Open year-round, strollers fully experience the work and refined lifestyle of this 20th Century literary giant.
Dynamic and welcoming, this small village of 30 souls – where artists, vintners and farmers rub shoulders – has adopted the poet's motto: “Here time passes on foot like an invitation to the sweetness of life ...”

Tribute to the poet Joseph Delteil 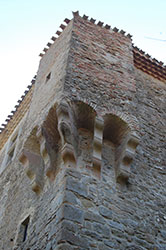 From 1994 to 2014, The Most Loyal Friends of the Poet (ASPEC), led by Magali Arnaud, have paid tribute to Joseph Delteil and freedom of expression with "La Grande Deltheillerie" festival. Among the big-name performers they have brought to the village's stage are Georges Moustaki, Nilda Fernandez, Bireli Lagrène , Souad Massi, Jordi Savall and others. Sharing enthusiasm around a creative work and a literary life are at the heart of this adventure. The Sentier-en-Poésie was opened in 1999 by Paco Ibañez, becoming one of the first thematic routes drawing visitors to the region. Magali Arnaud and Philippe Forcioli developed the concept and staging.

In honour of Joseph Delteil’s singular work and his birthplace in the woods surrounding Villar – a village still dominated by nature – it seemed natural to put the writer's words in the native forest landscape that inspired him. Thus came about the Sentier-en-Poésie open-air museum with its small theatre of greenery, an original and inspiring hike through the heart of the Corbières.