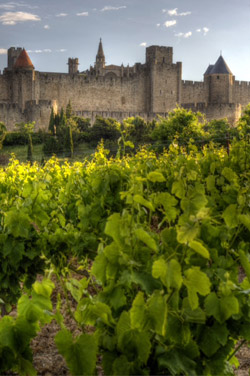 Situated between the Cabardès on the northern side, the Haute-Vallée to the south, boardered by the Lauragais in the west and the lézignanais in the east; this mini region has been a natural passage between the Mediterranean Sea and the Atlantic since antiquity. The magnificent ancient city of Carcassonne overlooks the Aude Plains, the lower city and the 13th century domicile of Saint Louis. The history of the city is present everywhere you look : mansions from the 14th and 15th centuries, the Art Museum, and the Saint Vincent Church from the 14th and 15th centuries. The Cathedral Saint Michel, constructed at the end of the 13th century, and the Grain hall from the 16th century are must-sees !  The Canal du Midi is also to be admired, the amazing waterway signed Paul Riquet was essential for economic and now touristic development. The magical history of Carcassonne has lured many top chefs who have made the city as tasty as it is interesting. It is now a world-class destination.