BIZE-MINERVOIS
One of the highpoints of prehistory 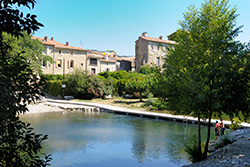 Bize-Minervois is to be found hidden at the heart of a mountain gorge, built in a circle around the church of Saint Michel (12th century) which was one of its first buildings.

It is a charming circular village which still preserves several medieval edifices and is one of the highpoints for prehistoric culture with the Cavas Las Fonts cave. In 1827 the prehistoric remains of the Bize Man were discovered, bearing witness to the existence of life in this area some 40,000 years before our time.

Opposite the caves, standing on rocky outcrop is the Tour de Boussecos, an ancient watchtower and one of the archaeological treasures of the Cesse valley.

On the edge of the river Cesse can be seen the buildings of the royal textile factory, built by Colbert in the 17Th century and active until 1789, and today housing holiday homes. This is a village rich in history and a restful place to spend a several days exploring the quiet charm of the Minervois and, during July, enjoying the widely renowned Fete de l’Olivier.