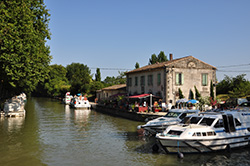 Fascinating not only for the spiraling unban planning, Bram is a Gallo-Roman town loaded with history and archeological marvels. Bram has been developing since about 200bce in the middle of the Fresquel plain, a natural gateway to Limouxin, Razès, Ariège, and the Noire Mountain. It is positioned at the crossroads of two antique trade routes, the Asuitaine Route between Narbonne and Toulouse, and the North-South running road that linked the Noire Mountain to Ariège. Its geographical location was very helpful to early commercial development.

During the Middle Ages, Bram’s circular construction began. The city is organized in a few concentric circles around the church. This style of construction is called “circulade,” or circular in English and was common during this time in the region. Like many villages, Bram has grown and developed new economic activities while conserving its exceptional quality of life under the shade of a rich and prestigious past. The Maison de l’Archéologie in the center of the village will teach you the six themes of the Lauragais’ remarkable history; from prehistory to the middle ages via a very interesting stop in antiquity.