Perched on a rocky outcrop, this pretty, terraced village is definitely one of the small wonders to be found on the Conflent plain.  Over time, the citadel of this ancient defensive site, was replaced by the imposing St Vincent's church, which overlooks a maze of cobbled streets to explore, either alone or with a passionate local guide*. 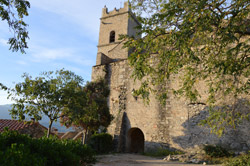 Listed as one of the 'most beautiful villages of France', discovering Eus takes a little effort... as you need to explore on foot (car park at the village entrance). At the top of the village, perching on a rocky peak, is the Gothic Saint Vincent's church (1726-1743). Back in the Middle Ages, this was the location of the Château de la Volta. Built to protect the small hillside village, it was actually constructed... by the village women! Typical of the region, with its single nave and side chapels, this gem of a church is full of surprises. It boasts several altarpieces dating from the 17th to the 19th century. Notably, there's a magnificent altarpiece of the high altar by Paul Sunyer, the brother of Joseph Sunyer, who created the altarpieces in Prades and Collioure, and also his Christ altarpiece dating from 1690. After the church, have a look at the exhibition in La Solana Museum. Located in an old house in the village, it displays costumes, tools, photos ... all of which recall the Catalan traditions of the 19th and 20th centuries **. Then, wander down the many steep little streets lined with artists and craftsmen, until you arrive at the River Têt at the bottom. Time to admire the 13th century porch of the 11th century Romanesque chapel (a listed historical monument), which is crafted in pink marble from Villefranche-de Conflent. In August and September, don't miss the Nitz Eus ***, an intimate and charming cultural festival of music, songs, texts ... magical moments to savour at the top of the village in St. Vincent's church or at the Maison du Temps Libre.